I’d been out on trips searching for wildlife before, many times before. But this time it felt different. We had target species and we were in a seriously “birdy” place. Things were getting serious. Barren Grounds is a protected Nature Reserve in the Southern Highlands, approx. 2.5 hours from Sydney. It has sustained faunal significance since 1956, originally formed as a fauna reserve and in 2009, it was declared an Important Birds Area by Birdlife International (http://datazone.birdlife.org/site/factsheet/23834). Thanks to its wondrous heathlands and sedgelands, it is home to the much-treasured Eastern Bristlebird and the elusive Eastern Ground Parrot. Its typically known as a Hanging Swamp and it’s the ideal place for the +160 bird species to be found (or to hang).

It was only the obvious place for a green amateur such as myself (+ my much-less amateur mate) to photograph some birds.

And for me to start my photographic campaign.

I am not sure whether I could have demanded a much more idyllic Autumnal day. Cold, crisp air was stirring in my lungs, the sun was out, balmy on my face. My crony for the day, Matt, eager and jovial to get the day going, is a much-experienced “birder”. His experience and vast knowledge would prove valuable today, tomorrow and forever more and he has an adroit ability to respectfully put himself in the best photographic position for that flawless pic. Definitely one to listen and learn from. I awaited his initial directions with fervour, awaiting impatiently on his next words.

Words of wisdom I say…

We set off down the Griffiths Loop, walking clockwise and the heathland was magical. If I were a ground parrot or an eastern bristlebird, I’d call this place home too! The heath was dominated by Button Grass (Gymnoschoenus sphaerocephalus) and was vast. Along the track we found many toppled Port Jackson Mallee (Eucalyptus obstans) presumably fallen due to the shallow soils of the hanging swamp, with many main stems lying horizontally, coppicing trunks, standing vertically to reform the canopy.

We encountered our target species of Eastern Bristlebird and another spoken species, the Beautiful Firetail (unquestionably living up to its name) almost immediately. With amazement, we saw the bristlebirds appearing on the edge of the track, my ineptitude in spotting this covert creature on full display. Damn they are quick and the bristlebirds habit of scantily running through the undergrowth meant that pictures were extremely difficult and I was left snapping blurry pics of grass and tail feathers. I managed a few sightings and they are plainly beautiful, like the vast Australian horizon, plain but oh so delightful.

The best I could get… (which really wasn’t that good)

Better luck with the beautiful firetails, their beauty far from inconspicuous, their call and whistles hauntingly apparent, they move almost silently, eerily appearing and disappearing with nonchalance. Just a pair this time, feeding amongst the Shrubby She-Oak Allocasuarina distyla (a favourite shrub of mine). Super stoked as this was the first sighting for me.

A gorgeous Beautiful Firetail appeared from its haunting whistles

We moved further along the Griffith Track finally moving into the tall Eucalypt forest. We wandered through to the Natural Stone Bridge where we breaked and were lucky enough to see a Little Eagle perch low in the trees above us. Unfortunately, as we tuckered into a turkey sandwich or two, we missed the shot. Bugger! Better to appease our appetites I say!

Just past the Natural Stone Bridge we encountered the only Southern Emu-Wrens we were to see for the day. They have a very quiet call (again noticed by Matt and not myself) and we stopped and found just 1 wren, a male, rummaging through the dense Hakea (Hakea teretifolia).  The low-lying, dense heathland was ideal habitat and I’d imagine there were plenty more lurking behind the impenetrable vegetation, staring out knowingly, just out of camera shot.

The remainder of the walk was far less exhilarating and we failed to find any more newbies. Despite the crisp snap in the air, we managed to stumbled across a couple contentious snakes. Fortunately for me, it was again Matt who halted my gait and if it wasn’t for him, I just may be hopping round today, one-legged and footless. Thanks Matty! 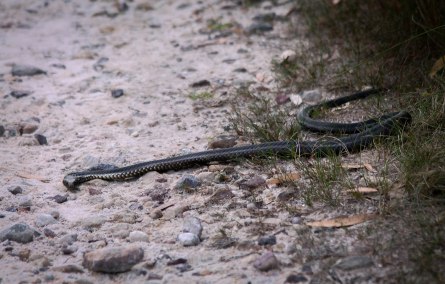 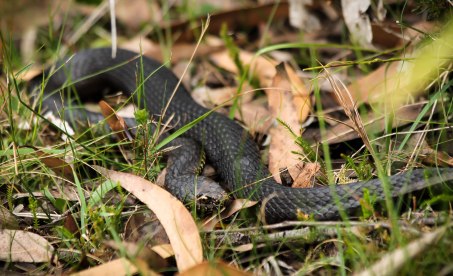 We moved onto Budderroo National Park to search for more photo ops. The road in was semi-tarred. To the left was beautiful button grass grassland and to the right was some more famous heathland. Very birdy indeed. It was early afternoon. We spotted a couple of firetails and as we parked the car, we sauntered back to investigate. This time they eluded us but something magical was about to happen. Matty, the experienced birder, has travelled much of Aust. and has taken many-a-beautiful snaps in his time and has experienced some wonderful, nature-y moments. But even he never foresaw this very fortunate event. As we stood, a flicker of green rose from the grassland. Standing aghast, we both knew what we saw. A Ground Parrot had been flushed and it encircled us as we watched awestruck. What a magnificently beautiful bird.

To think this could happen to us was discernible. To think our luck would be that great was undignified. I was hooked. This was amazing! To think, a 2-3 second glimpse of green feathers has managed to hook me like a trout on a fly!