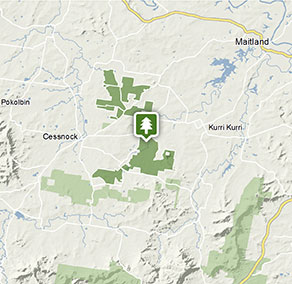 My mate Matt and I decided we should follow up on seemingly a wild goose chase… wild parrot chase. The critically endangered Swift Parrot was the target species. The legendary Spotted Gum (Corymbia maculata) was blossoming on the Central Coast and the blooms were attracting the “Swifties”. Swift parrots are a migratory parrot and are an absolutely fascinating parrot. Mostly green with red around its bill, throat and forehead it is swift in name and in nature. The Swift Parrot is a migratory parrot, breeding in Eastern Tasmania in late Spring and Summer, and astonishingly, this bird will then travel across Bass Strait and feed in South Eastern Australia, from Victoria to Queensland. They can sniff a meal better than a Irishman to a spud and will navigate their way astutely, from flowering Eucalypt to flowering Eucalypt, their crème de la crème being Box Ironbark Forest. 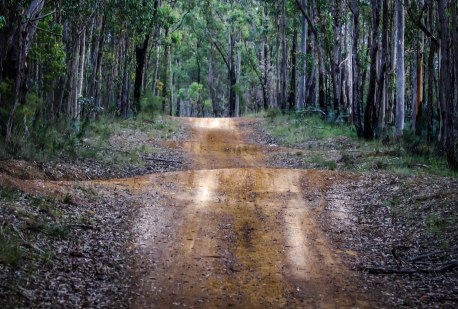 We were in Werakata National Park, confident and stirring, hopeful of a glimpse of the Swift Parrot. We started at the Kearsley South Firetrail, immediately greeted by Noisy Friarbird. A number of other honeyeaters were around, Yellow-Faced Honeyeater, Yellow-Tufted Honeyeater and Brown-Headed Honeyeater, high in the canopy, shying away from the camera. I wish they knew they should fly down to a nice, photographic height. With our heads cocked like a plane spotter to a plane, Matt and I wondered “where the F*#k are all the blossoms?” We spoke without a collocation of words, merely looking at each other and wondering. In fear of jinxing our inevitable fate, we continued, muted. After about an hour of trepidation, we stopped. Looking at each other, Matt muttered… “Where are the flowers mate”. I knew what he was going to say. No flowers meant no Swift Parrots. We would have to try another location.

We drove to Pelton, about a 15 minute drive, still hopeful and expectant of our intended target. A beautiful forest of Spotted Gum greeted us, a lanky forest of hush, rangy and spindly, rising high up into the canopy above. Every direction you looked… Spotted Gum. Here, there and everywhere. How were we to find our Swift Parrot friends amongst all these trees that looked alike? Its going to be like finding needle in a haystack, a diamond in the rough, Wally in a sea of Wally’s, like finding someone who has never seen an episode of Game of Thrones. Needless to say, finding one was going to be very difficult. Still we persevered, in the car, then on foot. We were fortunate enough to come across a few more birds, White-Throated Tree-Creeper, Black-Face Cuckoo Shrike and a Dusky Woodswallow. Unfortunately still no Swift Parrot. With the roars of dirt bikes looming on the horizon, becoming more and more frequent, then roaring by us, we decided it was time to call it a day. Fortunately on our way back to the car, we stumbled across a Chestnut-Rumped Heathwren, a lifer for both myself and Matty and a beautiful little scrambler.

All-in-all it was an enjoyable day spent with a mate. We covered over 500km in driving time, spent over 8 hours searching and came up with only a few species on the list. It was a quiet bird day. And we missed on our target. The remnants of feeding parrots were strewn across the forest floor; moribund blossoms. These days are bound to happen. We missed out by a mere week or two; struck out but not defeated. That is kind of how this game works. There is something special about chasing the seasons, following Mother Nature and reacting accordingly.